BOOK AN APPOINTMENT
blog
< Back to all blog articles

Are thongs bad for your feet?

It’s no secret by now that traditional flimsy thongs are associated with gait alterations that can contribute to more serious issues, but for many patients, thongs are a hard habit to break. A new generation of “comfort” thongs offers an alternative, but clinicians remain wary.

Anyone who spends time in airports in the summer expects to be subjected to a sea of faces. But at floor level, there’s another sight to behold—a flood of thongs.

The “official” shoe of summer is most often the classic, minimal flat rubber sole with the Y-shaped, or thong, strap. Sometimes it’s jazzed up with sequins, done in vivid colours, or tooled from leather. But these embellishments, of course, don’t address lower extremity practitioners’ criticisms of thongs—that they offer little to no support for the foot, and can lead to excessive stress in lower extremity tendons and muscles, which must work overtime to hold on to the shoe.

Perhaps in response to all the bad buzz, a “new generation” of thongs has emerged that seems to offer many of the same features as comfort footwear—contoured footbeds, slightly higher heels, and thicker outsoles. The rubber has been replaced by performance materials, such as EVA (ethylene vinyl acetate). The straps are sometimes adjustable. The footbed may feature antimicrobial properties. Are these updated thongs really any better than the traditional ones in terms of foot health and biomechanics?

The fuss about thongs

A 2013 study found that, compared with sneakers, thongs were associated with a shorter stride, larger ankle angle at the beginning of double support and during swing, smaller braking impulse, and shorter stance time. Other studies have also reported kinetic effects of thongs.

“because the thong and the foot are not firmly connected, the toes have to be more engaged to keep the foot and thong together. This increases the forces across the ankle and foot and causes compensatory joint positions during gait and standing.” Biomechanics experts are just beginning to understand the long-term effects of these.

Using thongs on and off on a daily basis doesn’t necessarily cause problems. But when flip-flop wear time increases dramatically, that can be problematic. 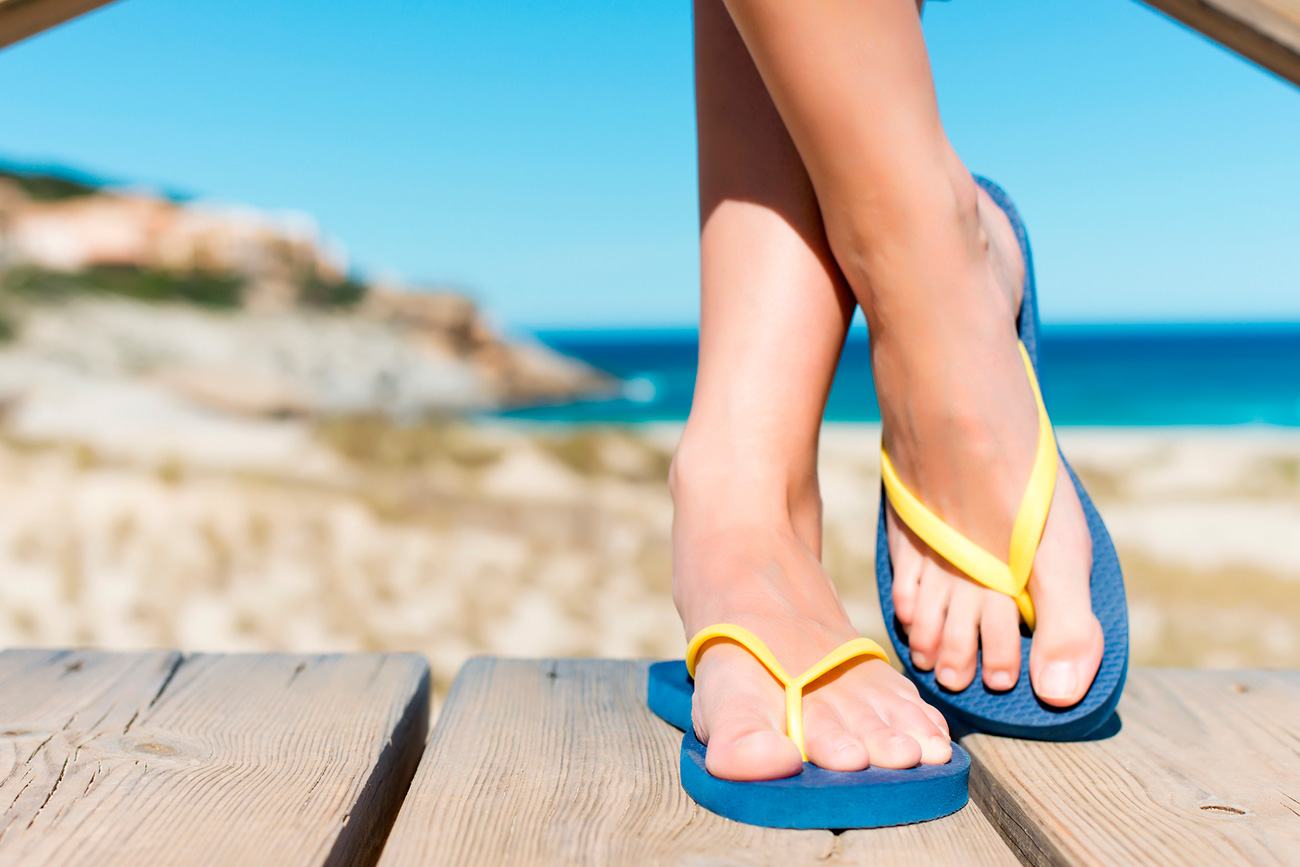 Of the chronic issues related to thongs that specialists see clinically, plantar fasciitis topped the experts’ list. This may be because the lack of structure in conventional thongs allows for excess stress through the soft tissues of the foot.

Next on the list is Achilles tendinopathy. Again, this may be an overuse issue related to the repetitive stress of gripping and the shoe’s lack of structure. Then there is metatarsalgia, which can occur because of lack of shock absorption provided by the thongs’ very thin outsole.

“If there’s no contoured arch contact between the shoe and the foot, especially in the pes cavus foot, you’ll see a lot more of those impact forces, especially when walking on pavement. The thin outsole provides very little shock absorption,”

Just as long-term use of thongs can cause these lower extremity disorders, people who already have these conditions should stay away from this footwear, the experts agreed. Even after treatment, incorrect footwear may increase the risk of recurrence.

“You can’t say conclusively, ‘If you wear thongs, the conditions will come back.’ But you are certainly putting yourself at a higher risk if you are wearing flat shoes with no arch support. But if the person is being treated for the condition, and is not in a substantial amount of pain, then the occasional use of thongs may be acceptable.

Lastly, patients at risk for trips and falls should be cautious about wearing thongs, and they are definitely not the preferred footwear for people who require walkers or other assistive devices. This includes patients with lower extremity disorders that impact ambulation and people with neurological disorders who have trouble with balance.

“They need stability and shoes that aid proprioception,” he said. “If the foot is covered and the shoe has a snug closure that is holding it to the foot, it activates sensors [in the foot] so the body knows where it is in space. If a patient requires an assistance device, such as a walking stick or a walker, that’s an indication that the balance has gotten to a point where a thong would no longer be appropriate.”

Despite the potential problems associated with thongs, experts say the reality is that most people without major lower extremity disorders who wear thongs on a regular basis will do just fine.

Not all research has been weighted against thongs. A 2016 study of 15 healthy adults found no differences in temporal-spatial parameters for walking with thongs versus barefoot, suggesting successful adaptation by the flip-flop wearers.

However, that’s not to say the shoes didn’t render some changes, including an increase in peak knee flexion during swing and peak ankle dorsiflexion at terminal swing. It was also noted that maximum peak separation between foot and thong was 8.8 cm, and occurred at preswing. Finally, minimum toe clearance of the hallux measured 4.2 cm during barefoot walking versus 1.6 cm in thongs.

The findings suggest that, despite some spatiotemporal adaptation, the separation of the thong from the foot led to increased knee flexion and ankle dorsiflexion during swing, most likely to maximize adherence to the foot. Also, the thong’s lower minimum clearance (versus barefoot) could increase the risk of tripping over uneven ground.

That brings the discussion to the next generation of thong designs. The websites of various thong manufacturers feature claims related to arch support, midsole shock absorption, and stress reduction on the feet, ankles, and knees. Others describe their thongs as having ergonomic arch contouring and foam impact pillows to cushion the balls of the feet. There are thongs that supposedly react to body temperature and conform to the foot. Finally, there are companies that will design thongs with custom footbeds based on digital scans.

Studies found that areas of high plantar pressure associated with a standard flat thong were lowered when an enhanced thong was used, particularly peak pressure under the heel and pressure-time integral at the first metatarsophalangeal joint. Contact area under the midfoot was nearly 20% greater in the enhanced thong than the flat version, and time spent gripping with the hallux was significantly reduced. It has also been found the enhanced thongs were associated with a lower rate of loading at heel strike and less frontal plane motion at the ankle during stance, compared with flat thongs. Biomechanically speaking, “comfort” thongs are preferable to the flat rubber thongs that can be found piled in a bin at the local discount store. 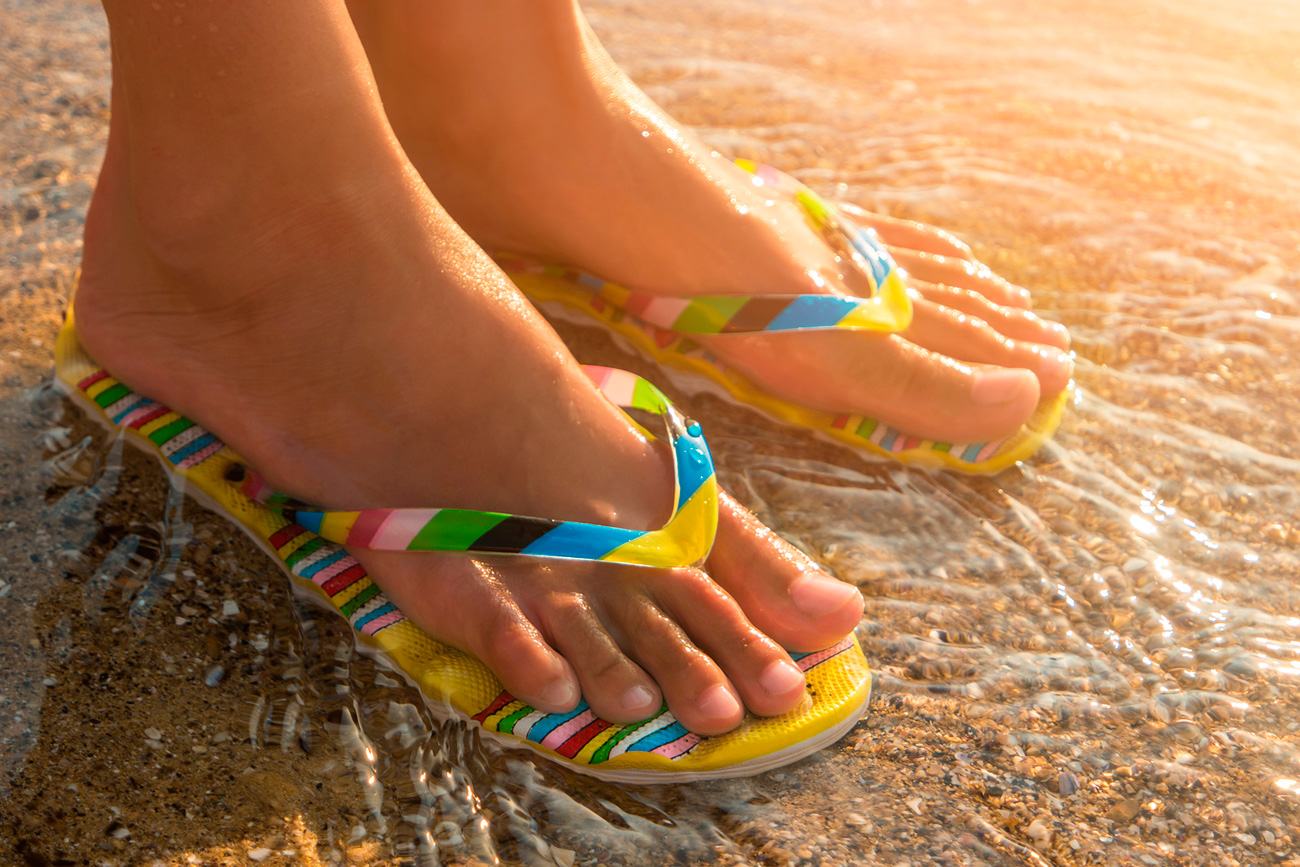 Enhanced thongs are better than those with flat rubber soles, thanks to the slightly elevated heels and contoured arches. Comfort thongs do offer improvements over flat ones, but some of the limitations of thongs still have not been addressed.

When someone chooses a thong, it is because they want to feel unencumbered, they want to feel ‘free.’ Unfortunately, this lack of support—foot-to-shoe contact—that most people desire is at the heart of the injuries that can result.

However, even with an enhanced thong, the foot still works to hold on, which increases demand on the tibialis anterior and extensors in the foot. Mitigating the amount of work the foot has to do to stay in the shoe comes down to proper fit, and ensuring the top strap fits as securely against the foot as possible.

“When you look at the supportive thongs, it’s a lot like buying off-shelf insoles. If you are going to invest in these shoes, it’s worth going to a store with a knowledgeable person or anyone with some biomechanical knowledge that can help fit you into the right thong”

Patients with bunions often have a tough time finding shoes that don’t irritate the condition, so they may be happier in thongs. Patients with severe hammertoes, or clawed toes, may be in the same position in terms of needing footwear that will not blister the tops of the toes, so the enhanced thongs may be a viable option.

The bottom-line: Thongs may not be the best footwear, but they may not be all that bad either.

Despite the considerable price differential between standard thongs and their enhanced counterparts, you’ll get more longevity out of a more supportive pair of thongs. So it would be an investment and possibly be cheaper over time.

It is recommended to use plain old common sense when it comes to thongs. “As with all things in life, listen to your body. It will tell you when you are doing something right or wrong. Thongs may be a possible culprit for difficulties that people experience, whether it’s foot-related or back pain,” he noted. “There are no definitive yes/no categories here. If you notice that every time you wear thongs, your back aches, then there’s a good chance that they are not the correct footwear for you.”

Book in with one of our podiatrists HERE.

Strength Training – Is “no pain, no gain” necessary?
By Barangaroo Clinic
There has been a long term belief in the fitness community that soreness or DOMS (Delayed onset of muscle soreness) is a good indicator of a successful gym session, but is this true? Being sore after a workout is the side effect of your mus...
Getting Back Into Training & Exercise After A Break
By Barangaroo Clinic
It’s a brand new year and everyone is creating their own goals to accomplish, many of which involve fitness and health. As physio’s, we see so many people starting to exercise again which is so great to see. So let me guide you through ...
How To Strengthen Your Hamstring For Running And Why?
By Barangaroo Clinic
Where are our hamstrings? What is most commonly called “the back of our thighs” is where our hamstrings are. They are 3 really strong muscles that help us be able to walk and run. What do they do? Their main action is to extend the leg ...
BOOK ONLINE NOW